The Universe is enormous. Just enormous. It isn’t possible to truly grasp the scope of space out in…space. There are literally more stars – far more stars, in fact – in the Universe than there are grains of sands on all the beaches and in all the oceans of Earth. It’s really mind-boggling. But that mind-bogglitude (yeah, “bogglitude”) does lead to a few things that are comprehensible and expected. Enter NASA’s recent discovery:

NASA’s planet-hunting Kepler spacecraft has confirmed the discovery of its first alien world in its host star’s habitable zone — that just-right range of distances that could allow liquid water to exist — and found more than 1,000 new explanet candidates, researchers announced today (Dec. 5)…

The potentially habitable alien world, a first for Kepler, orbits a star very much like our own sun. The discovery brings scientists one step closer to finding a planet like our own — one which could conceivably harbor life, scientists said.

This is certainly exciting, but it is also practically expected. With the billions and billions of galaxies out there, along with the trillions and trillions of stars and planets, there is bound to be more than a few balls of rock that are very, very similar to Earth. Moreover, not only is our galaxy quite common, but so is our solar system. We have an average star with an average array of planets. There isn’t anything special or privileged about our location. To believe otherwise is to be deluded or desperate or tremendously small-minded. We’re going to see many more Earth-like planets in the coming years.

I expect the future findings of NASA to be very exciting indeed.

It has recently occurred to me that I’ve been neglecting the Hubble eye candy posts. Well, I’m technically still doing that because this image (“Ring Nebula”) was taken with NASA’s Spitzer Space Telescope. But it’s still eye candy. 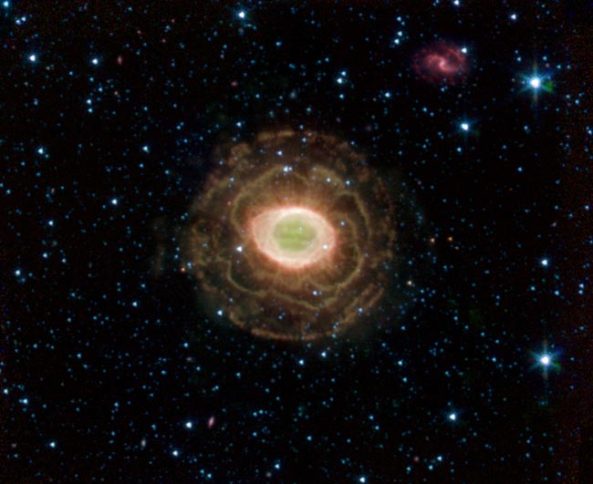 When I choose Hubble images to put on FTSOS, I specifically try to avoid the Crab Nebula image. It’s just so common, so frequent. It’s almost a stereotype in a way, at least to me. In fact, it wouldn’t surprise me if I’ve slipped up actually posted it in the past. But I was just rethinking it. Stereotype, cliche, overused, too common, too frequent: none of that matter. It’s a frickin’ cool image. That’s all the justification I need.

A short film about the history of Hubble and the images it captures – called “Hubble 3D” – premiered this past weekend.

But here are the money shots: The telescope’s new Wide Field Camera and infrared eye can look at– and shoot — stars, gas and dust 2.5 million light years out. Taking those photos and using advanced computer visualization, the film whisks viewers on scientifically realistic flights through time and space.

One rushes at, yes, warp speed (actually much faster) past the star Sirius, 50 trillion miles from Earth, to peer into the nursery of developing galaxies in the star cluster known as Orion’s Belt. A journey through our galaxy, the Milky Way, to neighboring Andromeda, reveals 2,000 galaxies and a massive black hole.

The article says Leonardo DiCaprio “ably” narrates the 43 minute film. Mayhaps one journalist doesn’t much like the actor.

The film is slated for wider Imax release for this coming weekend and then an even larger release in August. While it would be nice if everyone liked science for, well, the sake of science, there’s nothing wrong with a little eye candy. Especially in 3D.

Thanks to a spike in hits today on Hubble posts, I’ve gone and found that NASA released more Hubble images taken since the telescope’s recent upgrade. The first is one of the most recent images (and may as well just be a close-up of a past release). The second is older, but not blurry and generally ugly. 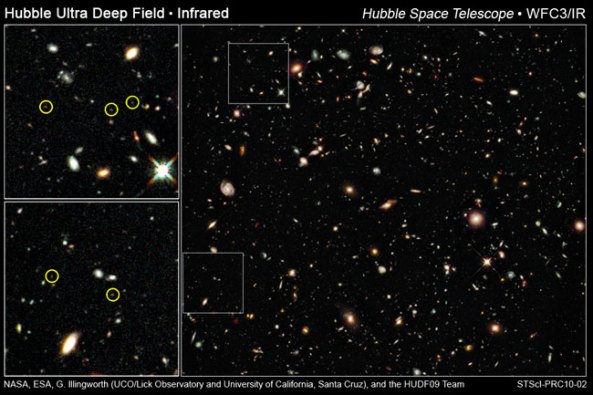 Update: I’m not sure if this one has just been released, but it’s the best I’ve seen so far.

Since being recently serviced, Hubble has taken one of the most stunning and deep images yet.

NASA’s Hubble Space Telescope has made the deepest image of the universe ever taken in near-infrared light. The faintest and reddest objects in the image are galaxies that formed 600 million years after the Big Bang. No galaxies have been seen before at such early times. The new deep view also provides insights into how galaxies grew in their formative years early in the universe’s history. 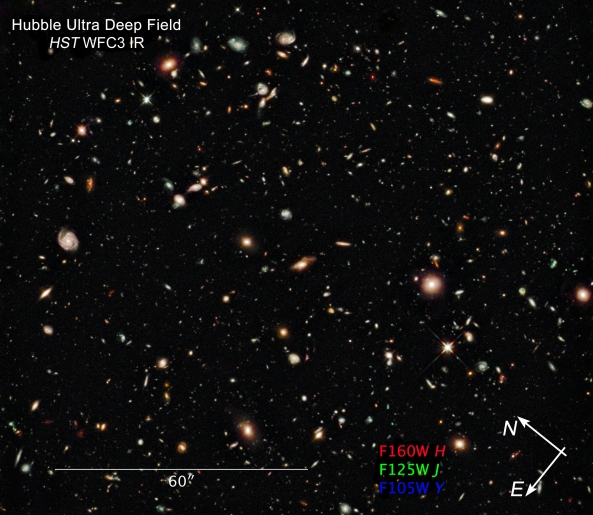 Sorry for the graphics. I wanted to post the largest version I could find and this was it. An even larger image is available here.

Nasa scientists have produced the most compelling evidence yet that bacterial life exists on Mars.

It showed that microscopic worm-like structures found in a Martian meteorite that hit the Earth 13,000 years ago are almost certainly fossilised bacteria. The so-called bio-morphs are embedded beneath the surface layers of the rock, suggesting that they were already present when the meteorite arrived, rather than being the result of subsequent contamination by Earthly bacteria.

This meteorite has actually been known for some time on Earth (1984), but it wasn’t until recently that better technology (thank you, science) made it possible to carry out far more detailed tests. The likely conclusion appears to be that this is, in fact, evidence for life.

As always, scientific excitement needs to be tempered with an eye toward always needing greater evidence (and there is some in the form of two separate meteorites). But that doesn’t make this any less exciting for me. It is crashingly obvious that life is wholly tenacious, so its existence elsewhere – in a Universe with more stars than grain of sands on all the beaches of Earth – is practically expected. Its close proximity and initial discovery is where the excitement really rests. 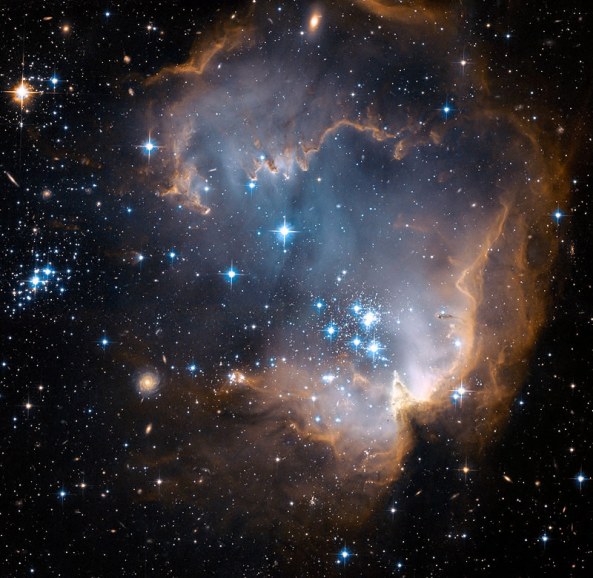 NASA discovered there is plenty of water on the moon.

Experts have long suspected there was water on the moon. So the thrilling discovery announced Friday sent a ripple of hope for a future astronaut outpost in a place that has always seemed barren and inhospitable.

“We found water. And we didn’t find just a little bit. We found a significant amount,” Anthony Colaprete, lead scientist for the mission, told reporters as he held up a white water bucket for emphasis.

He said the 25 gallons of water the lunar crash kicked up was only what scientists could see from the plumes of the impact.

This is equivalent to roughly a bathtub’s worth of water from this double-impact.

One part of me wants to endlessly speculate at the possibility of microbial life. But all reason and rationality tell me to be cautious. Water does not automatically mean life (especially when its frozen).

…but what if it does mean life, at least in this case? Would the world realize the utter significance of this discovery? Not since Darwin described evolution by natural selection has there been such an important find.

So it hasn’t escaped my notice that my hit count has been treading absurdly high in the past couple of days. And it equally hasn’t been missed that most of the views are devoted to my Hubble contest post. Well, it turns out I’m a bit late, but the reason is that NASA has released new images since Hubble’s last repair.

“Hubble is back in action. Together, NASA and Hubble are opening new vistas on the universe,” astronomer and frequent Hubble user Heidi Hammel said.

With the obligatory quote out of the way, let’s get to what everyone wants: the photos.