I have long wanted to put forth the point that there are more planets than stars in the Universe. This goes to my contention that it is reasonable, even necessary, to believe that there is copious life in the Cosmos. After all, from the time when Earth’s surface cooled to when life began to appear was relatively short. It appears that all it takes for self-replicating molecules to get going is the right conditions. With so many planets, the opportunities are so vast, it has surely happened over and over again.

But I couldn’t make this exact point. I still made the same effective point, but I had to rely on the trillions and trillions of stars. Of course, plenty of people have inferred over the years, especially the past decade, that there must therefore by billions, maybe trillions of planets. But we need something more concrete. We need observation. And now it looks like we’re there:

Three studies released Wednesday, in the journal Nature and at the American Astronomical Society’s conference in Austin, Texas, demonstrate an extrasolar real estate boom. One study shows that in our Milky Way, most stars have planets. And since there are a lot of stars in our galaxy — about 100 billion — that means a lot of planets.

It could be that the Milky Way is a weird outlier, a place where planets are easy to make. But there isn’t any reason to suspect that. The observations show that we are an average galaxy with an expected array of stars. What’s more, we are seeing what happens around stars. It isn’t just that these giant gas balls form in space and that’s that. No, it’s much more. Most of them come with their own planetary pals. An accurate average of the star-to-planet ratio remains to be seen (they say 1.6 planets per star, but that is probably extremely low), but it is clear that we’re talking about trillions and trillions out there.

None of this changes the thrust of my argument about exo-life, but it does allow me to be much more specific. This is very nerdexciting.

Well, of the Universe. But as seen through the eye of Hubble.

I know I’ve posted this in the past, but it’s just such a great photograph.

Astronomers have discovered a massive cluster of galaxies in the early Universe.

The most massive conglomeration of galaxies ever spotted in the early universe has been found, astronomers say.

This behemoth galaxy cluster contains about 800 trillion suns packed inside hundreds of galaxies. And it’s not even finished growing.

The newfound cluster, called SPT-CL J0546-5345, is about 7 billion light-years from Earth, meaning that its light has taken that long to reach us. Thus, astronomers are seeing this clump as it was 7 billion years ago.

By now, it likely will have quadrupled in size, researchers said.

How one can imagine there is no life dancing amongst those 800 trillion (and by now, 3200 trillion) stars is beyond me.

NASA has recently taken an image of a galaxy which is suppose to resemble a snowflake. I guess I can see it, but it’s hard not to just think “Oo, a spiral galaxy” instead. 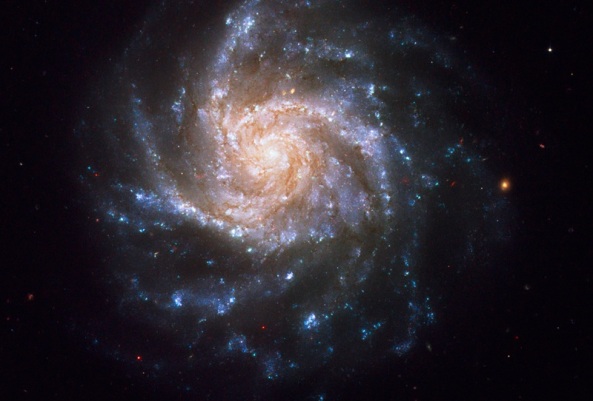 It completely slipped my mind that the winner of the Hubble contest had been released until I saw the absurd number of searches for “Hubble” on my stats page. The winner is ARP 274.

On April 1-2, the Hubble Space Telescope photographed the winning target in the Space Telescope Science Institute’s ‘You Decide’ competition in celebration of the International Year of Astronomy (IYA).

The winner is a group of galaxies called Arp 274. The striking object received 67,021 votes out of the nearly 140,000 votes cast for the six candidate targets.

Arp 274, also known as NGC 5679, is a system of three galaxies that appear to be partially overlapping in the image, although they may be at somewhat different distances. The spiral shapes of two of these galaxies appear mostly intact. The third galaxy (to the far left) is more compact, but shows evidence of star formation.

Two of the three galaxies are forming new stars at a high rate. This is evident in the bright blue knots of star formation that are strung along the arms of the galaxy on the right and along the small galaxy on the left.

The largest component is located in the middle of the three. It appears as a spiral galaxy, which may be barred. The entire system resides at about 400 million light-years away from Earth in the constellation Virgo.

Hubble’s Wide Field Planetary Camera 2 was used to image Arp 274. Blue, visible and infrared filters were combined with a filter that isolates hydrogen emission. The colors in this image reflect the intrinsic color of the different stellar populations that make up the galaxies. Yellowish older stars can be seen in the central bulge of each galaxy. A bright central cluster of stars pinpoint each nucleus. Younger blue stars trace the spiral arms, along with pinkish nebulae that are illuminated by new star formation. Interstellar dust is silhouetted against the starry population. A pair of foreground stars inside our own Milky Way are at far right.

The International Year of Astronomy is the celebration of the 400th anniversary of Galileo’s first observations with a telescope. People around the world came together to participate in the IYA’s 100 Hours of Astronomy, April 2 to 5. This global astronomy event was geared toward encouraging as many people as possible to experience the night sky.